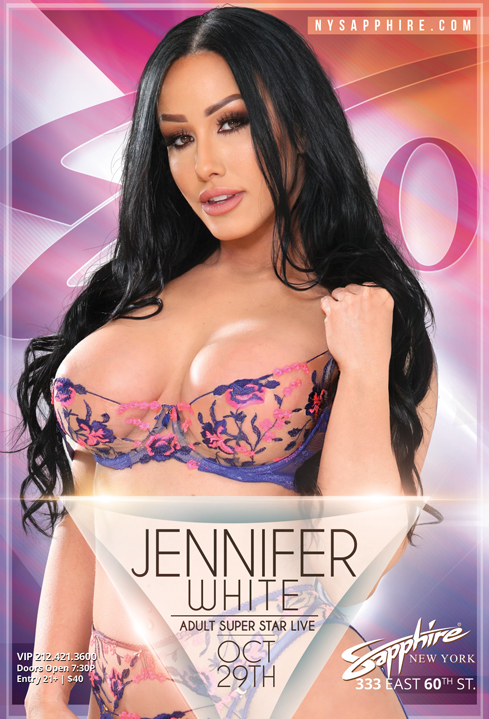 Jennifer White was born in Agoura Hills, California.The 5'2" brunette of Dutch, English, Russian, Jewish, Ukrainian descent began her career in January 2009, a month before her 21st birthday. In her first year she filmed a dozen scenes. Her career expanded to include webcam modeling, and feature dancing. Since 2009, Jennifer has worked for studios and companies including Brazzers, BangBros, Hustler, 3rd Degree, BLACKED, Wicked Pictures, Digital Sin, Devil's Film, Digital Sin and many more. Jennifer is a multiple-time AVN Award nominee including a nomination in 2011 for "Best New Starlet". In 2015, Jennifer was nominated for the AVN Fan Award for "Hottest Ass". This was followed by an AVN Fan Award nomination in 2016 for "Best Boobs", followed in 2017 by a Fan Award nomination for "Most Epic Ass". She was nominated in 2013 by the Sex Awards for "Sexiest Adult Star". She won her first award in 2013 from the Spank Bank Awards for "Gangbanged Princess of the Year". She quickly won numerous Spank Bank Awards including Spank Bank Technical Awards between 2013 and 2018. She was also nominated in 2014 in several categories by the XBiz Awards and XRCO Awards. When not working, Jennifer enjoys shopping, camping, swimming, attending theme parks, watching movies and reading books.

Get Up Close and Personal with Me!